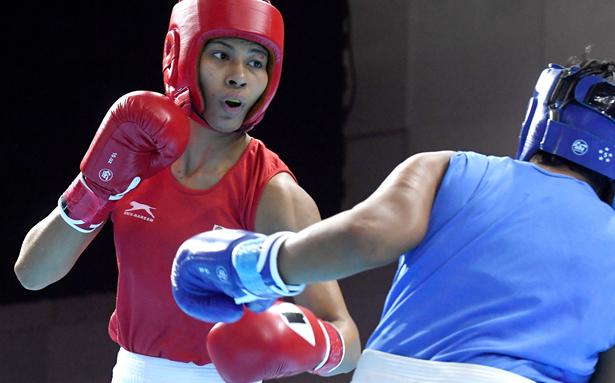 Encouraged by an Assam teammate, the World Championship bronze medalist Jamuna Boro And through the worlds and Asian medalist Shiva ThapaLovlina – who recently injured her nose during the selection trials for the Asian Championships – did not let her debut bout in the 75kg category last long.

Warming up is our boxing sensation Lovlina Borgohain 🥊 she steps into the ring 🔜 @LovlinaBorgohai#36th National Games 🇮🇳 pic.twitter.com/ZDc3XtzpSA

In the opening round, Lovlina rained punches on Nishi Bharadwaj who got two standing counts before the referee stopped the contest. Hussamuddin Mohammed of SSCB with Satish Kumar of Uttar Pradesh in the featherweight category of men’s boxing at the 36th National Games in Gandhinagar on Wednesday, October 5, 2022. | Photo credit: VV Krishnan

Husamuddin had a comfortable 5-0 win over Satish Kumar. “Later Commonwealth GamesI spent some time with my (new born) daughter before resuming my training for the trials. “I will use the national games to prepare for the Asian Championships,” Husamuddin said.

The first bout between Ankit from Haryana and Sai Kumar from SSCB ✔️ pic.twitter.com/iMC4rjJpU6