Kotidom Kebresles broke Britain’s Paula Radcliffe’s previous mark of 2:20:57 in 2005 to win the women’s marathon at the World Athletics Championships. 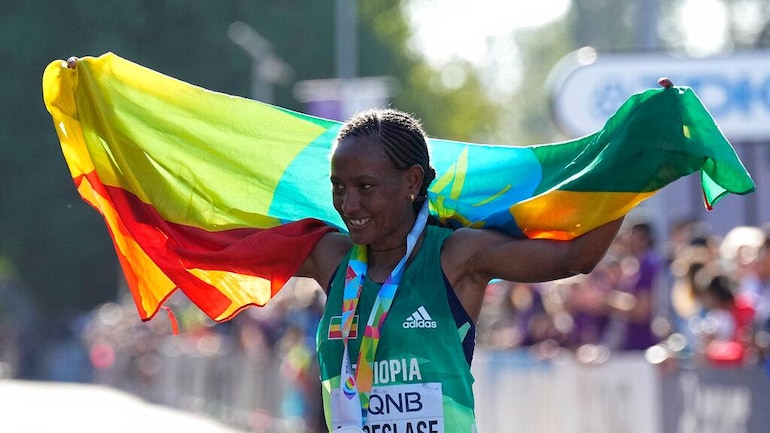 Gotytom Gebreslase broke away with 2km to go and Korir didn’t let the gap close as she beat Britain’s Paula Radcliffe’s previous mark of 2:20:57 in 2005.

“I’m very happy and I want to give all the glory to God,” Kebresles said.

“The Kenyan runner asked me to pass her, but I was patient. At 40km, I felt strong and decided to leave.”

It was Ethiopia’s second marathon victory in Eugene, Oregon, after Tamirat Tola won the men’s title in another championship record 2:05:36. Remarkably, this is Gebresles’ second major title in as many years.

‘I tried my best’

Korir, who set the fastest time of his career, said he was frustrated that Jebresles didn’t want to keep pace with him after they rounded the 27-km mark.

“Ethiopian runners are very fast. It’s not easy to run with them, but I tried my best,” he said.

The field got off to a fast start at 6.15am local time, benefiting from sunny but natural conditions with temperatures above 50 degrees Fahrenheit (10C).

After Ethiopian Ababel Yeshaneh crashed out of the leading pack with less than 10 kilometers to go, Israel’s Lona Salpeter had a chance to claim third place on the podium.